Greening up in P. A. 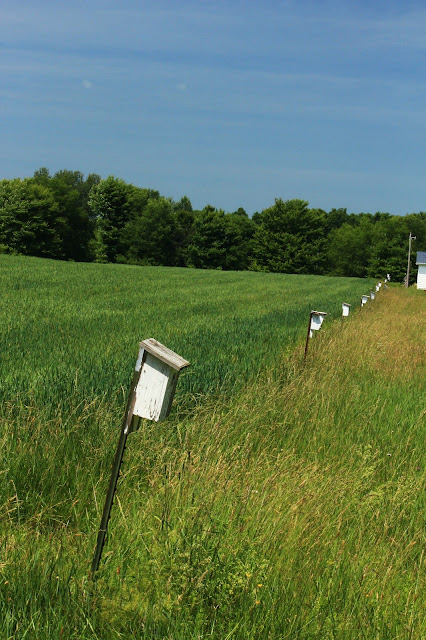 A couple of scenes along country roads in northwestern P. A. show spring's in command.


"Useful as well ornamental," as Uncle Albert of Summers Run would say of these birdhouses all in a row.

An Amish buggy out on a morning errand. 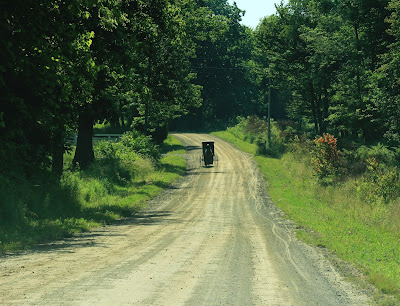 Posted by Along Country Roads at 6:39 PM No comments: 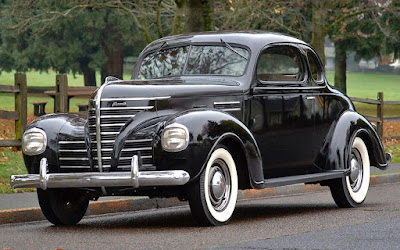 This year is no exception. That Pennsylvania is a mecca for car enthusiasts and show-goers is inescapable.

Here's a list of some majors being held in the epicenters of Carlisle and Hershey. Google for details, of course. Other shows are being held across the Keystone State as well.

Here are some shows sponsored by the
Antique Automobile Club of America:

Posted by Along Country Roads at 9:39 AM No comments: 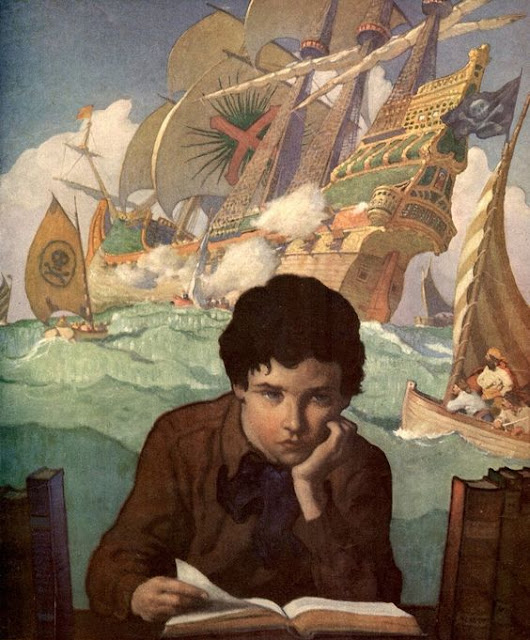 From the creative genius of N. C. Wyeth, American artist and popular illustrator of the 20th century, active until 1945 when he perished in tragic car-train accident. He took up residence at Chadds Ford in southeastern Pennsylvania and established the area as the home ground for son Andrew and grandson Jamie––a patrimony of great importance to American art today.

We here think this wonderful illustration depicting soaring imagination is a very fitting symbol for our forthcoming blog, Books for Boys. A symbol for this blog's interest in encouraging boys, the reluctant readers in most households, to learn the wonders of good and classic works.

Wyeth produced an astonishing number of illustrations and non-commercial pieces. Leaf through classic works of James Fenimore Cooper, Robert Louis Stevenson, Daniel Defoe, Washington Irving and most likely you'll encounter Wyeth's heroic depictions of characters, hero or heroines, and adventurous treks. Who can determine if boys and other readers were more inspired by the text or the Illustrations?
Posted by Along Country Roads at 11:54 AM No comments: 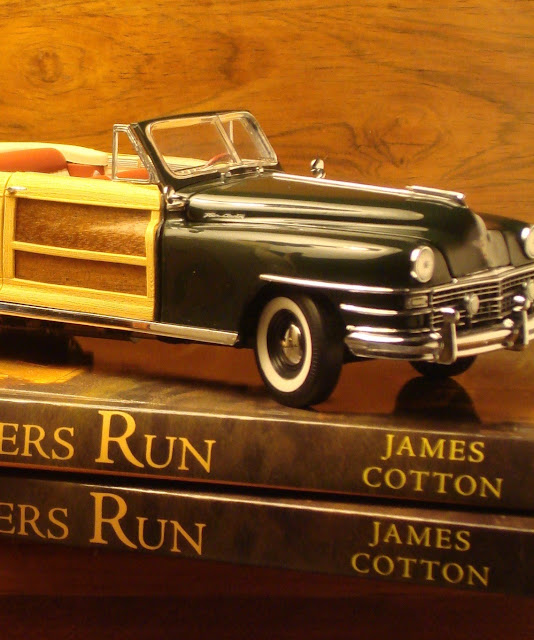 Those of you who read and subscribe to Pennsylvania Magazine should be familiar with its excellent listing of nonfiction books covering travel and historical subjects of the Keystone State.

As expressed on our sister blogs, A Feel Good Novel and Along Cotton Road, we're looking for recommendations of fiction written with Pennsylvania as the setting. Especially books for boys, the reluctant readers in most households.

Works with a "feel good" ending are very welcome as well.

List your recommendations in the comment section below this posting or send us an e-mail to alongcountryroads@yahoo.com

Posted by Along Country Roads at 2:37 PM No comments:

Due West and Due North

West of New York City and straight north of Philadelphia, that is.
Here's a clue to this special location in the Keystone State.

Capture all the excitement and intrigue of a factory tour as our highly-skilled craftspeople transform. . . . Come to see our grand Visitors Center in. . . . , Pennsylvania, where you can feel the history, smell the. . . . and play legendary. . . . Our world-class. . . . museum honors the. . . . Please join us in celebrating our 175th year of. . . .  building excellence.

Can you fill in the blanks?

Can you identify the factory from its statement above? 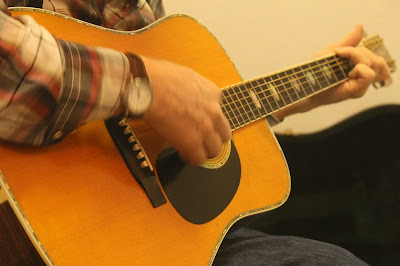 Yes, it's the C. F. Martin Company, Nazareth, Pennsylvania. It has been creating these stringed instruments beloved by artists across the world for more than 175 years. Martin continues to innovate, introducing techniques and features that have become industry standards for fine guitars. Whether for folk, classical, bluegrass, or just plain acoustical applications, Martin guitars––produced in the Keystone State––are revered.

One of the world's leading acoustic instrument makers, Martin guitars are hand-made by skilled craftsmen and women, who use a combination of new design and techniques along with those introduced by the company founder––some tools and methods dating back to 1833! Here are just a few of their models:

Factory tours are available. Visit the company's website for details at www.martinguitar.com
Posted by Along Country Roads at 10:14 AM No comments:

The "P" and "H" in the Grange's national emblem represent "patrons" and "husbandry", as the official title is the National Grange of the Order of Patrons of Husbandry. 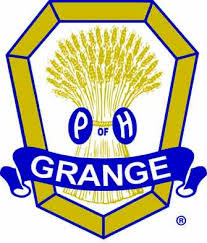 There are more than 2100 active Granges in the USA. Pennsylvania currently has 246 of that number assembling in buildings such as this one.
The National Grange convention will meet November, 15-19, 2016,  in Washington, D. C. to celebrate its 150th anniversary serving rural communities across the nation. PA's Session will be held October 19-22, 2016. 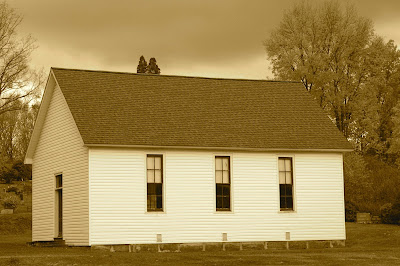 Posted by Along Country Roads at 3:32 PM No comments:

As Was Their Habit

From our Aunt Bea's Plymouth Collection 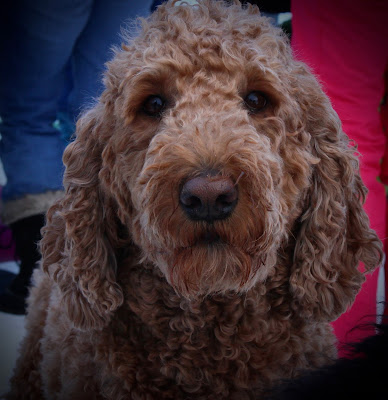 The boaters were approaching the dock, and he glanced toward their arrival through the spokes of the deck railing. He sighed: how to react, how to regard this young man now in their Jenny's life?
“She could have children. Hmmm.” she said wistfully.
“It would be hard, love. Be a struggle for the both of them.”
“Yes, but she’d have us. She’s lucky we’re so close by.”
“And, . . .” he had returned to his paper, rustling it vigorously, “we’re lucky to have her.”
“What do you think?”
“What? Think what? Don’t get dreamy over there.” He could read her smile through simply hearing the undertone. No need to look up.
“They could get married, why not?”
“Dunno. He’d be taking on quite a load.”
“Well, it’s not like she’s dependent. She’s become self-sufficient basically. They could . . . thrive. We’d help.”
“Bridle that enthusiasm, girl.”
“There are hurdles, certainly. But they can be conquered. My goodness, look at all she’s done with herself. Out there today, waterskiing, for heaven’s sake. I can’t do that . . . but she can.”
He felt her reading him, luring him into some comment beyond a quick brush-off, some commitment which if not profound or enduring, would at least be important and positive enough for the both of them.
“You’re hopeful for her, aren’t you?” she asked.
“Of course. She’s as deserving as anyone, moreso than most. But there’s one thing we cannot give her, and that’s happiness with some good man.”
She scooted to him, wrenched the wicker chair around, and perched on its edge so their knees touched. Then she grabbed up their mugs of cold coffee, handed him his, and they clinked them together.
“Over the gums!” she piped
“Look out stomach,” he growled, voicing the line he was assigned. “Gol, you do get the bee in your bonnet,” and he swirled the mug’s contents, then swigged it all the way.
She jumped from her chair and ran to the deck’s railing. “Come on out! Come out to the sun,” she called.
“Yes,” he said and sighed flatly.
That she had returned to the French doors and waited for his compliance was fully expected. And he knew she would say nothing. She’d stand there, arms folded, leaning against the doorjamb, perhaps tapping a toe faintly. No escaping it.
“Now quit that spying.” He peered over his “Fezziwigs,” projecting he thought, his sternest expression.
She placed her hands behind her and leaned squarely against the door, that chin tucked under those soulful eyes. This gray-haired girl, he decided, remains as fully distracting as that night in the student union so many years ago.
He rose, tossed the sports section on the wicker divan for later and padded out behind her to greet the couple coming up the dock.
“He’ll have to get used to Ralph and Ralph to him,” he told her as they watched the young pair approach wth the big tawny dog at her side.
“Oh, that will happen. And Ralph loves boating, you proved that. I think they’re friends already.”
“Umm, not likely, pet. He’s devoted to one person and one alone. It’s their training.” He knew Ralph, her dog, could be offish, not threatening of course, but indifferent when others were around. His loyalty encompassed only Jenny, his mistress, not other members of the family.
And as Jack watched the trio climb the hill to the house, suddenly his throat grew tight and eyes welled.
How good and true was their daughter’s helper and friend! How deep its devotion and how inseparable they had grown over the years. And how observant of those ancient breeders to call his kind, “The Shepherd.”
For such was Ralph’s lot, guiding her up and down the steps of life, gentle yet firm and strong, her daughter’s constant companion. How willing to sacrifice a dozen, perhaps a hundred, more carefree dog lives than the one chosen by man for him. How easily he accepted the harness, the task hourly, daily, and how tirelessly he rose to her command.
My God, what fool could dare say animals have no souls?
He knew the wife at his side caught the tear glistening on that bright Sunday morning––he did not care––and when their daughter waved up at them, it seemed as if she could see again.
“How did she know to wave?” he asked, wiping his eye.
“She felt him wave.”
“He told her to.”
“No. She felt it. It’s instinctive.”
“Kind of a woman’s thing, I guess.”
“Yes, perhaps. Being blind helps.”
The young couple and the dog disappeared around the blue willow hedge that embraced the deck there. He told her: “Thank you.”
“For what?”
He didn’t answer.
“For what, hon?”
“I’d rather not discuss it right now.”

(When Aunt Bea and I called on the Hanlons one morning, they were leaving for a trip to visit Jenny and her new husband. This short story was developed from that brief encounter.
The dog pictured above could have been Ralph.)
Posted by Along Country Roads at 1:46 PM No comments: