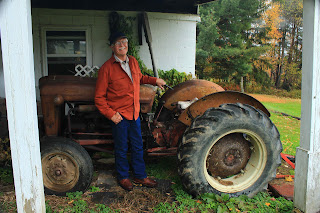 Your Humble Blogger with his Uncle Al's Ford 800 tractor, which Ford called the NAA series, and a successor to the 1953 Golden Jubilee. The Golden Jubilee represented a departure from the familiar 8n, 9n, and 2n series of small utility tractors Ford was, and is, so noted for. Numerical designations during this period were 600, 800, and 900 depending on whether the tractor bore a wide or tricycle front end and other power and feature designations. Put a lot of hours on this great old-timer and it remains one reason I favor utility-type tractors to this day. Yes, it runs. Would love to restore it back to the condition I knew in the 1950s. The Ford shown earlier was an 860 model, probably produced in the mid-1950s.

Captured across My Corner of Pennsylvania this October, 2012.
Posted by Along Country Roads at 5:53 PM