Some interview highlights from James Cotton, author of The Boys of Summers Run

Would you say The Boys of Summers Run is a coming-of-age, young adult work?

Perhaps, but publishers try to pigeonhole fiction because it’s convenient. I consider it more an intergenerational novel as there are strong relationships linking my narrator and elders of his community. Farm boys and Little League Baseball create the backdrop, but it’s not a play-by-play sports story, either. More an account of the lessons from life and loss played out in rural Pennsylvania.

You’ve said the book could be read in Sunday School. How so?

Well, my main character develops a crush on a Mennonite girl from a neighboring farm. Then, in Las Vegas, he teams up with the Haupleton twins, from an LDS family . . . for a school project on urban gardening. And, the funeral takes place at St. Matthew’s in the Meadow, an Episcopal setting. So, it became rather ecumenical. In contrast to some works in the genre, the language is very tame and the narrative portrays likeable people doing pleasant things.

Unlike some of the grim plots found in young adult novels, your character Claude takes up life on what looks like a prosperous, historic farm.

Yes, Claude and his recently widowed mother land there, trying to sort out what’s next for them. But Shadeland is facing the realities of taxes, markets, the constant upkeep and challenging stewardship of keeping the place intact, in the family, and providing a livelihood for the next generation or two. It’s roots for Claude, something he yearns for. So his loyalty quickly spreads its cloak over Shadeland and the family of his departed father. He becomes a farm-boy-in-training.

That’s why the move to Las Vegas is such a wrench. Shadeland is grounding, its bedrock extending deep into the values of another era. Las Vegas pits Claude against his mother’s new chapter and her in-laws who are deeply invested in casinos, hotels, and a high-octane lifestyle.

So, does he return to Summers Run and Shadeland? Ever?

Aside from the Haupleton twins, things do not go so well for Claude in Nevada, particularly on the baseball diamond where he’s a pitcher for a local team. But a mentor in Pennsylvania once told him: “It’s not always your friends, Claude, who become your best teachers.” So, he applies such to his new life.

I’ll risk a spoiler here. Yes, Claude does return to Summers Run and Shadeland and his old teammates, the Panthers. In one passage, he tells us: “It’s summer, and I feel my stride matching that of my tallest shadow.” Some of us recall being twelve or thirteen, standing on the cusp, looking across the chasm between boyhood and manhood.  Claude and his friends grow . . . sometimes within an afternoon. His Uncle Albert remembers: “the pure joy of being a boy. It doesn’t last long.”

And the book seems to portray that through Claude and the others. Would you call it a bittersweet account?

There’s that element, yes, but Claude joins the other fatherless boys of Summers Run––Tim, Aaron, Kevin, and Jeff––banding together and negotiating the terrain their fates have defined as best they can. Outcomes are hopeful. Baseball becomes but one unifier.

The Turnip, a huge hot air balloon, is referred to occasionally throughout the work. And then there’s the rooster. Did you plant these to tie the work together?

Well, the balloon is from an event staged by my hometown, Meadville, PA, every June, where a couple dozen hot-air balloons are launched and put on a show. The rooster comes from family lore. Claude’s father, at the age of four, went a-climbing up to touch the “wooster” on the weather vane high atop Shadeland’s giant barn. The rooster comes center stage drawing Claude’s narration together. Like a good motif should.

Do readers ever ask how Claude could be so perceptive as a young teen, telling his story?

We tried to point out early on, that the narrative is two-pronged. Claude relates the action at the time it took place, and then he often applies his perspective from twenty years later. This dual approach is tricky for an author to navigate but ultimately gives the reader the three-dimensional picture and a richer progression.

You call your book a “feel good” novel. Aren’t you afraid prospective readers might think it too syrupy?

The works of Rosamunde Pilcher and Jan Karon often deal with tragedy and grim realities. Yet they remain “pleasant reads” or “heart-warmers.” It takes a deft hand to deal with the grit of life and yet not wallow in it. I think those of us who write in this vein, expect any art to uplift. If it doesn’t, what’s the point? 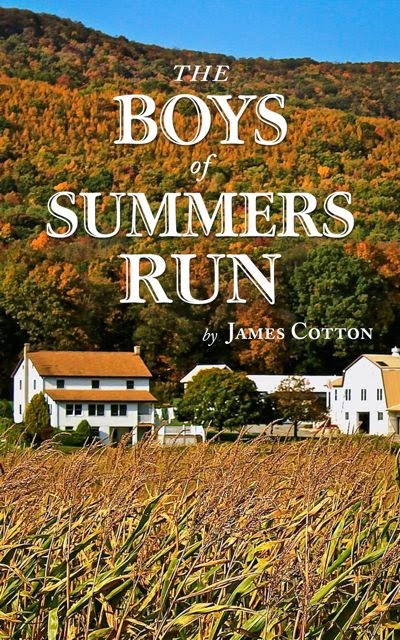 Posted by Along Country Roads at 10:55 AM